Oklahoma law provides stiff penalties for domestic abuse. The penalties are enhanced even further when the act is committed in the presence of a child.

Domestic assault refers to a threat or attempt to use physical force against a person with whom you have a domestic relationship. Domestic battery refers to the act of physical 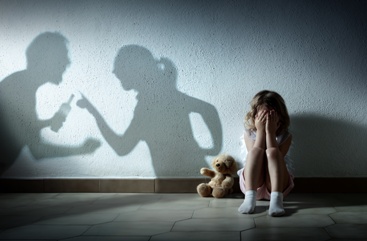 violence itself. In most cases, Oklahoma residents are charged with domestic assault and battery under 21 OK Stat §21-644.

“In the presence of a child” means that the child is either physically present in the area where the abuse occurred or it is possible that the child may see or hear the act of violence. For example, your child does not need to be in the room where you argued with your spouse if the child is in the home and within earshot of the confrontation.

It is a common misconception that penalties are only enhanced when the child belongs to one of the parties involved in the confrontation. The child does not need to be related to you or your alleged victim for you to be facing the enhanced penalties.

Penalties for Domestic Assault and Battery in Front of a Child

As with domestic abuse charges that don’t involve a child present, you can expect there to be a protective order issued that will prevent you from contacting the alleged victim while the charge is pending. A conviction will permanently take away your firearm right under federal law.

Receiving a Deferred or Suspended Sentence

Charges for domestic abuse in the presence of a child will not be dropped simply because the alleged victim isn’t interested in taking legal action. The state has the authority to use what’s referred to as a victimless prosecution. However, a judge may decide to issue a deferred or suspended sentence.

With a deferred sentence, the court can delay the proceedings for up to 10 years without entering a judgment of guilt. The case can later be dismissed if the defendant complies with all of the conditions outlined by the court.

With a suspended sentence, the court can allow the defendant to serve all or part of the sentence on supervised or unsupervised probation. Probation can last as long as the maximum sentence associated with the charge.

If you receive a deferred or suspended sentence in a domestic violence case, you are required to attend 52 weeks of domestic violence intervention counseling (DVIS). If you are late or miss more than three sessions in a row or seven sessions in the year, you will need to start the entire process from the beginning to avoid being found noncompliant.

What You Can Do to Protect Your Rights

When you’ve been accused of domestic abuse in the presence of a child, there are some common mistakes to avoid:

After your arrest, it’s vital that you seek immediate legal assistance. A conviction can affect your life for many years to come—even making it difficult or impossible to obtain certain types of employment.

You can request our free guide, Domestic Violence Charges in Oklahoma: What You Need to Know, to learn more about what to expect after your arrest and what an attorney can help you to do to build a strong defense. As Oklahoma’s only private criminal defense attorney to focus his practice solely on defending clients accused of special victims crimes like domestic assault and battery, Lee Berlin shares his expertise to help you understand how to protect your rights.

The Berlin Law Firm uses a proprietary defense system to provide clients accused of domestic abuse in the presence of child with the best possible case outcome.